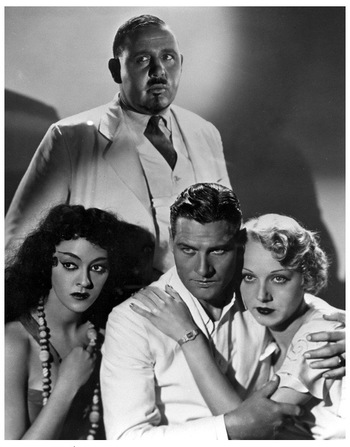 Island of Lost Souls (1932) was the first sound film adaptation of The Island of Doctor Moreau,note Earlier silent versions were made in 1913 (America) and 1921 (Germany). directed by Erle C. Kenton and starring Charles Laughton, Richard Arlen, and Bela Lugosi.

Edward Parker (Arlen) is the sole survivor of a mysterious shipwreck. He awakens to find himself aboard a cargo ship called the Covena, nursed back to health by Montgomery (Arthur Hohl), who is overseeing the shipment of various animals to an uncharted island. He persuades Montgomery to send a cable to his fiancee Ruth (Leila Hyams) in Apia, letting her know he survived.

When they arrive at the island, Edward runs afoul of Captain Davies (Stanley Fields), the drunken, perpetually pissed-off captain of the Covena, who tosses the castaway overboard onto the launch belonging to Montgomery’s employer, the reclusive surgeon Dr. Moreau (Laughton). Moreau protests but the Covena sails away.

On the island, Edward discovers that the apparent natives are all extremely bestial people, led by the wolflike Sayer of the Law (Lugosi). A beautiful woman named Lota (Kathleen Burke) takes an instant liking to the newcomer. Moreau finds the budding relationship between the two very interesting indeed. As Edward eventually discovers, the "natives" are actually various animals that Moreau has surgically evolved into humans. This includes Lota, but Moreau doesn’t tell Edward that, because he’s hoping Lota will mate with him, and produce offspring...

Meanwhile, the Covena docks in Apia without Edward. Ruth, having gotten her fiance’s cable Montgomery sent, confronts Captain Davies. When he finally confesses to Edward’s location, giving the the latitude and longitude of Moreau’s island. Ruth immediately hires Captain Donahue (Paul Hurst), a hard-drinking but far friendlier seaman, to take her to the island to retrieve her wayward boyfriend.

Neither of them suspect what horrors await them...

The film was banned in several countries and also heavily edited following its release, because much of its subject matter was deemed inappropriate. It remained unreleased on home video for years except for an edited copy released by Universal as part of The Classic Collection in the 90s, before the Criterion Collection finally released it uncut on DVD and Blu-Ray. Due to being acquired by MCA-TV in 1958, it is considered an honorary member of the Universal Horror canon.