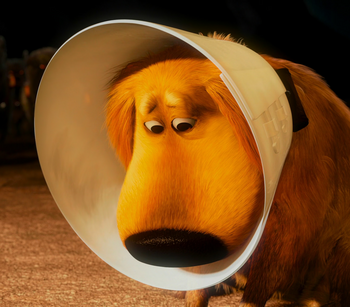 "I do not like the Cone of Shame."
"Can you please take off the cone of shame now?"
— Skye, PAW Patrol
Advertisement:

Tropey, stop biting that! You're going to pull out the stitches! I mean it! C'mere you!

In veterinary practice, the Elizabethan Collar (known colloquially as an "e-collar," "lampshade," or "cone of shame") has the purpose of promoting healing of a wound or lesion by preventing the animal from messing with it. It's very effective. However, there is one big problem with this device...

These devices often take the form of a large white plastic cone, though a variety

to this design are on the market. The typical "funnel" design is preferred in fiction because it's... well, funny. Not only does it make the wearer look pathetic and reduce their peripheral vision, it also opens the door for slapstick gags like bouncing off chairs, getting stuck in the pet door, or simply battering their owners' shins.

Just like neutering, it is one of the fates that animals despise. If the show features talking pets or funny animals, expect this to pop up at least once.

Not to be confused with Dunce Cap. If you are looking for actual Elizabethan collars (i.e. those worn by nobility in the 16th century), see Regal Ruff.

As punishment for losing "Kevin", Dug is given the Cone of Shame.

As punishment for losing "Kevin", Dug is given the Cone of Shame.