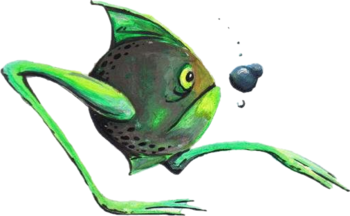 A Plimpy, a fish with frog legs.
Advertisement:

There is a tendency in fiction to treat all groups of "cold-blooded" creatures as interchangeable and more or less the same thing. This often ends up with the distinct lineages of reptiles, amphibians and fish mixed into one strange package; generally a finned, reptilian or amphibian creature with both lungs and gills. A Sea Monster can have this kind of appearance, as many blend characteristics of fish and reptiles; this is especially common for Sea Serpents, which even at their most reptilian often sport rayed fish fins. Alternately, this trope can occur in a single species where some members are Lizard Folk, some are Fish People, others appear to be Frog Men or salamander-like and so on.

Note that there are some animals out there that are classified as fish, but have amphibian and reptilian features (see the Real Life section). This is partly because the classic fish-amphibian-reptile classification is quite outdated, all three taxa are paraphyletic (i.e. do not contain all descendants of the same common ancestor), thus some animals, traditionally classified as "fish", are closer to amphibians and reptiles on the evolutionary tree. Similar features in different vertebrate taxa can also appear due to convergent evolution.

In fiction, this often plays out as if someone took an existing animal and stuck traits belonging to another class onto it.

Subtrope of Mix-and-Match Critters and Artistic License – Biology. See also Call a Pegasus a "Hippogriff", for similar confusion of mythological creatures in general, and Somewhere, a Herpetologist Is Crying, for other inaccuracies regarding cold-blooded animals in media. Has nothing to do with Cold-Blooded Torture.