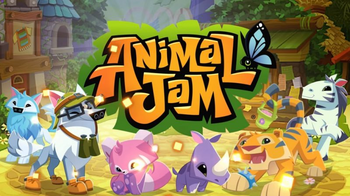 Animal Jam is an Fantasy "online playground", plus quasi-Edutainment Game, by WildWorks (formerly Smart Bomb Interactive), who were previously known for producing a few Licensed Games, and formerly in partnership and under brand of National Geographic Society. It's like Club Penguin, except with a wider variety of animals (which does include penguins) and set in a fantasy world.
Advertisement:

This game takes place in Jamaa, a Sugar Bowl country created by the deities Mira and Zios that is populated by technicolor Civilized Animals divided into and comprised of several different biomes. Not all is peaceful, however, as Phantoms, octopus-like creatures that are Anthropomorphic Personification of pollution, are causing havoc by invading the lands and seas, and spreading pollution wherever they go. It's up to the player and the Alphas to stop them by going on "Adventures", though doing so is completely optional, although, it is arguably one of the most fun parts of the game

Aside from adventures, you can play various mini-games to earn gems (the game's currency), buy pets, dress up your player character, decorate your home, and befriend other players.

In April 2019, a Darker and Edgier (and more fantastic) Spiritual Successor, Feral was announced and released as a beta in Septemper of that year. However, it closed in February of 2022 following the revelation to (and subsequent backlash from) the playerbase that WildWorks was developing a blockchain-based game known as Cinder using Fer.al's assets.

Not to be confused with the Jim Henson puppet show with the same name.

Hey buddy, you better get a whoop-whoop!