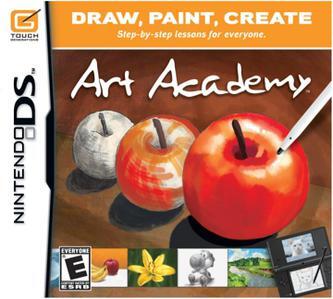 The box for the first game in the series.
Nintendo was having a roaring success selling the Nintendo DS to people who weren't really video gamers thanks to the success of titles like Brain Age and Nintendogs. One of the people who had been attracted to the system and its capabilities was British artist Tancred Dyke Wells who noticed that the system's touch screen could be used as an artist's canvas very easily and then decided that, naturally, the top screen could be used for tutorials. Thus, with the help of British Studio Headstrong Games, he developed Art Academy which Nintendo agreed to publish as a casual game.
Advertisement:

The first game in the series Art Academy: First Semester released to DSI Ware on September 14, 2009 in North America and December 25, 2009 in Europe. The follow-up Art Academy: Second Semester released on September 28, 2009 in North America and January 8, 2010 in Europe. The two games combined featured a total of 10 art lessons (four in the first and six in the second). The games also has a free paint mode which gave the player a blank canvas and the ability to use all available tools at once. Both games would get a full physical retail release in Japan on June 19, 2010, in Europe on August 6, 2010, in Australia on September 23, 2010, and in North America on October 25, 2010 simply called Art Academy.

The game was followed up with a few sequels Art Academy: Lessons for Everyone! (entitled New Art Academy in Europe and Australia) was released for Nintendo 3DS on July 28, 2012 in Europe, August 23, 2012 in Australia, and October 1, 2012 in North America. This game included a full 3D gallery for players to display their artwork and introduced colored pencils and oil pastels.

On August 9, 2013 the series made its way to home console for the first time with Art Academy: SketchPad releasing on Wii U. This entry was only an app with no lessons included and only the Free Paint Mode in place. The Wii U would get a full version on June 25, 2015 with the release of Art Academy: Home Studio (called Art Academy: Atelier in Europe and Australia) which included several new lessons along with adding a charcoal tool for drawing.