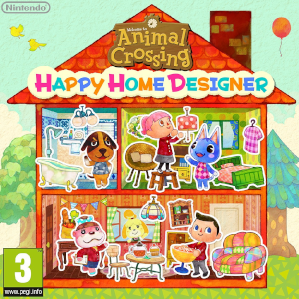 An Interior Designer Is You: The Game.
A major component of Nintendo's popular Animal Crossing franchise is the ability to design your house, as well as help other villagers with their houses when they ask you to bring furniture to them. Animal Crossing: Happy Home Designer takes this concept to its logical endpoint; You design houses for the various villagers and other NPCs who ask for your services.
Advertisement:

Released in 2015 on the Nintendo 3DS, Animal Crossing: Happy Home Designer is the first retail spinoff of the life simulation series Animal Crossing, being made in the same game engine and sharing many of its assets with Animal Crossing: New Leaf. It was marketed alongside special Animal Crossing amiibo cards that, when scanned, enable new villager requests for you and allow other villagers to visit the house where you just decorated at for a house party.

It's most notable these days for introducing a few of the ideas that would later be backported into New Leaf the following year with the "Welcome amiibo" update, such as the advanced customisation tool that adds touchscreen controls to move furniture, as well as the facial and hair customisation being ported over to the future entries; Pocket Camp and New Horizons. Happy Home Designer itself would later get a followup as a DLC expansion for New Horizons called Happy Home Paradise.