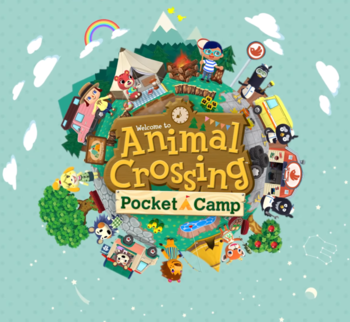 Animal Crossing: Pocket Camp (どうぶつの森 ポケットキャンプ, Animal Forest: Pocket Camp in Japan), released globally on November 22, 2017, is a spinoff title of Nintendo's Animal Crossing series. It is the first title in the series to be released on a non-Nintendo handheld, more specifically on mobile platforms.

In contrast to the main series where you are a villager or mayor managing a village, in Pocket Camp you are in charge of a campsite. Similar to the main games. you can customize your character, decorate the campgrounds, fish, and interact with camp visitors. The game takes note from Animal Crossing: Happy Home Designer with such features as being able to choose your character's skin tone and placing furniture using touch controls (a feature that was also implemented into the Welcome amiibo update of Animal Crossing: New Leaf).

Since version 4.0.0, the game's selling point is "bringing Animal Crossing into real life" courtesy of AR Mode, which allows the player to use the device's camera to take photos of animal friends overlaid the real world space or have a personal tour in the Cabin in first-person.