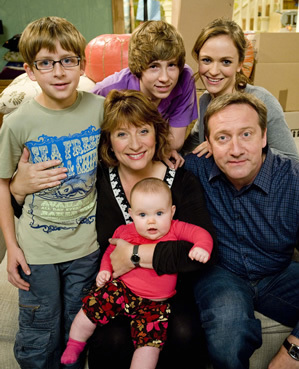 Guess who's related to who.
Advertisement:

A British family sitcom staring Caroline Quentin and Neil Dudgeon as Maddy and Jim Riley, a pair of recently married divorcées who collectively form an elaborate and dysfunctional family tree. There’s Maddy’s nerdy and effeminate son Ted Jackson (Patrick Nolan), Jim’s typically teenage children Danny (Taylor Fawcett) and Katy (Lucinda Dryzak) and their official baby daughter Rosie (Ava and Neve Lamb). Occasionally dropping in to see them are Maddy’s ex and Ted’s father, the hilariously unreliable Robbie (Mark Powley), Maddy’s eccentric mother Margaret Gregory (Marcia Warren) and the Weavers, the next door neighbours who aren’t as happy as they would like everyone to think.

Not to be confused with the Web Comic of the same name, or with the '40s-'50s American radio/TV sitcom starring William Bendix.