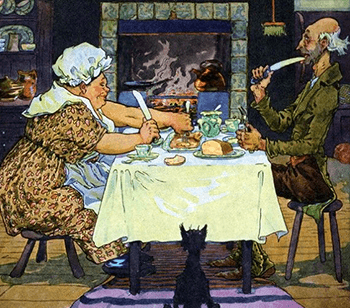 Jack Sprat could eat no fat, his wife could eat no lean,
And so between the two of them, they licked the platter clean.
Advertisement:

Frequently, when a couple is introduced, you'll notice a considerable difference in their figures. The man will often be slender or trim; scrawny, even; while the woman is more likely to, well, have a little more to love.

This trope can be implemented for a variety of different reasons. In some cases, it could be to allow the wife to have a more imposing presence, while making her husband appear more demure and submissive in comparison. By the same token, an artist may purposely draw the wife with soft, rounded features in order to convey warmth and hospitality, rather than dominance (the husband, by contrast, will have sharper, more angular features). Note that the couples who fit this trope do not necessarily have to be parents, but the wives and husbands who do will typically have traditional maternal and paternal traits, respectively.

While most inversions of this trope fall under Ugly Guy, Hot Wife (since we tend to see fatness as unattractive), the trope itself is not generally used to make the wife look ugly.

May overlap with Tiny Guy, Huge Girl (though that usually refers to a different kind of "hugeness"). Sort of the parental version of Fat and Skinny.