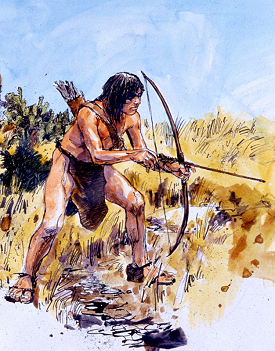 Also known as the Predator, Poacher, Stalker, Trapper, or Woodsman, and many other names besides. The concept dates back to prehistory, seen in hunter-gatherer societies, and several deities represented the Hunt (the earliest was perhaps Neith/Net; Egyptian goddess of war and hunting). Often their skills are seen as a demonstration of physical strength and power.

This is a character whose life and personality is built around game-hunting. Motivations vary—they may hunt to survive, either due to self-imposed isolation or as part of a hunter-gatherer culture, hunt purely for the thrill of it, or hunt to attain some sort of glory. Regardless of their motivations, these characters tend to be Closer to Earth and have a disregard for the rules of polite society. Game Hunter characters are unafraid to take risks, and may undergo a Rags to Riches story if they are The Hero. In terms of characterization, the characters run the gamut from Nature Hero to Proud Warrior Race Guy to Always Chaotic Evil, but have a tendency to be independent and driven regardless of alignment.

Plots that may or often involve Hunter-type characters are included on Big Trope Hunting. See also other similar character archetypes: Barbarian Hero, Farm Boy, Collector of the Strange, Death Seeker, Forest Ranger, Glory Seeker, Hollywood Natives, and Proud Warrior Race Guy. Due to the connection with nature, tends to overlap with The Beastmaster.

Not to be confused with a Hunter of Monsters, who hunts supernatural beings rather than wild game. Although, if they're in a world where the two are one and the same, there will definitely be overlap.