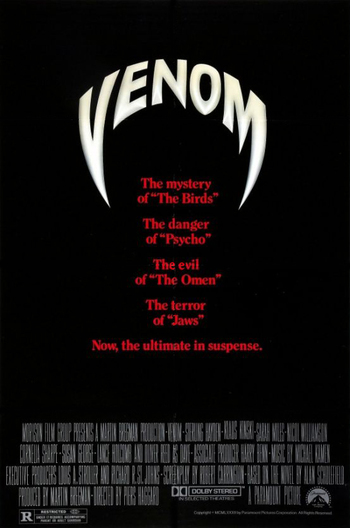 Not that one, Marvel fans.
Advertisement:

Venom is a 1981 British horror film based on the novel of the same name by Alan Scholefield, directed by Piers Haggard and starring Sterling Hayden (in his final film role), Oliver Reed, Klaus Kinski, Nicol Williamson, Sarah Miles, Susan George, and Michael Gough.

Master criminal Jacques Müller (Kinski) recruits Dave (Reed) and Louise (George), the servants of the rich Hopkins family, to kidnap 10 year-old Philip Hopkins. Unfortunately, a series of circumstances result in them kidnapping Philip's grandfather Howard Anderson (Hayden) and having to hole up inside of the Hopkins' London townhouse, which is now surrounded by the police. Oh, and a harmless pet snake Philip bought was accidentally swapped with a black mamba, the deadliest snake alive, which is currently loose in the house.

The film is notable for using an actual black mamba to play the snake.

Not to be confused with the 2005 slasher movie, or the 2018 film adaptation of the Marvel comic book character.

The following Tropes can be used to describe the film: