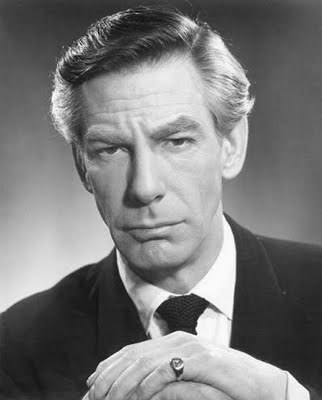 He appeared in over 150 film and television productions, from several Hammer Horror films to his well known role of Alfred Pennyworth, the old butler of Bruce Wayne in the Batman film series — he was one of the only two actors who remained in their role throughout those films along with Pat Hingle as Commissioner Gordon when said film series otherwise ran on The Other Darrin for its leads. His last role was the voice of Uilleam the Dodo Bird in Alice in Wonderland. He appeared in both the latter and in Sleepy Hollow (1999) (as well as in the Batman films) in part due to Tim Burton's fondness and admiration for the Hammer productions and casts.

He was married to Anneke Wills (Polly on Doctor Who) for seventeen years.

Not to be confused with the American voice actor Michael J. Gough. Interestingly, both contributed to the Batman franchise — Michael J. Gough voiced a younger James Gordon in Batman: Arkham Origins.

In case you’re wondering, his last name is pronounced to rhyme with "cough".

His works on TV Tropes: