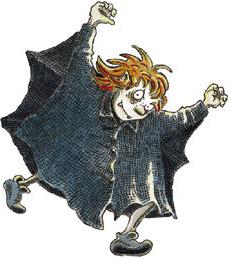 Rüdiger, the little vampire, as illustrated by Amelie Glienke
Advertisement:

The Little Vampire (original: Der kleine Vampir) is a children's fantasy series by German author Angela Sommer-Bodenburg that follows the adventures of young Tony Peasbody and the child vampire Rudolph Sackville-Bagg (Anton Bohnsack and Rüdiger von Schlotterstein in the original, respectively). The first book was published in 1979 and has spawned 20 sequels up to 2015, when the final one came out.

It has sold over 12 million copies and has been translated into over 30 languages. Sommer-Bodenburg states that her "vampire is not a bloodthirsty monster, but an affectionate little vampire with fears and foibles who will perhaps help free children of their own fears."

The books have been adapted to comics, theatre, radio dramas, two television series, a live-action movie, and a computer-animated movie.

The Little Vampire series and its adaptations provide examples of: