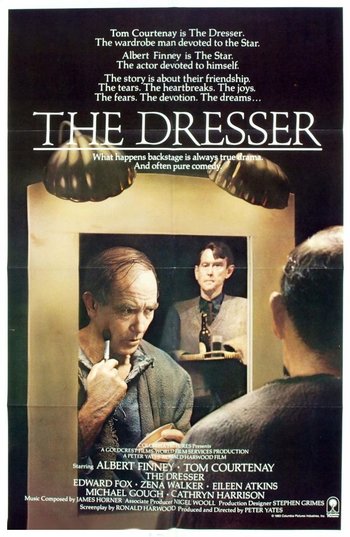 It is 1940, and German bombs rain down on London. A classically trained actor only referred to as "Sir" (Finney) is the leader of a traveling troupe of Shakespearean players. Sir was once an actor of some renown—he is a knight, after all—but he has been reduced to touring the sticks and backwater towns of Britain. The existence of a theater troupe is only made harder by the war, which leaves Sir's troupe stuck with mostly second-rate actors as most of the best young men are serving in the armed forces.

Actually, while Sir is the star of the shows, the real leader is his faithful servant Norman (Courtenay). Norman, who seems to have nothing in his life other than Sir, has his work cut out for him. Sir is many years past his prime, aging, fragile, struggling to remember his lines, emotionally unstable, constantly teetering on the edge of breakdown. Norman has a tough job getting Sir ready and dressed and fit to perform Shakespeare.

Ronald Harwood wrote the script, which was based on his own play. One of the rare films to feature two Academy Award nominations for Best Actor, for Finney and Courtenay; they both lost to Robert Duvall in Tender Mercies.

Remade in 2015 for TV, with Anthony Hopkins as Sir and Ian McKellen as Norman.