Film / Duel to the Death 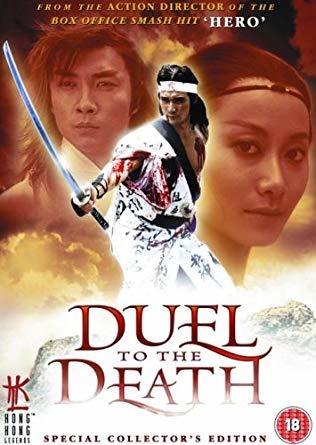 Duel to the Death is a 1983 Hong Kong/South Korean film starring Damian Lau and Norman Chu. It is the directorial debut of Ching Siu-tung and often considered to be one of the last in the era of the old Hong Kong Kung-fu films.

The plot follows a contest held every ten years where the greatest swordsman from Japan faces the greatest swordsman from China in a duel to the death for their nation's honor. As one of these duels approaches, we follow Chinese champion Ching Wan as he leaves his life of seclusion at a Shaolin monastery and Japanese champion Hashimoto leaving Japan under tragic circumstances and traveling to China. Both head to Holy Sword House, the location where the first such duel was fought, and where the descendants of the Chinese representative who won that duel still live and host the bout every time it is fought.

Meanwhile, something strange is going on throughout China. Notable Chinese fighters and sites famous for their martial arts are being attacked by ninja. As the time of the duel comes closer, Ching Wan and Hashimoto uncover a plot to rig the fight for sinister purposes. The movie follows their delving into the conspiracy.

Note: there are at least two fairly different English dubs, so depending on which one you've seen (or if you've seen the movie subtitled or in the original language) your experience of the tropes used could be different.