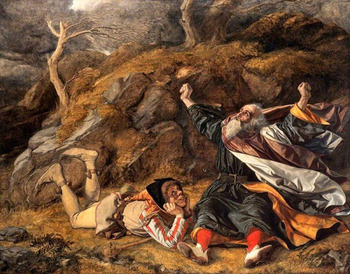 Once upon a time, there was a king with three daughters... and it all goes downhill from there.
"As flies to wanton boys are we to th' gods,
They kill us for their sport."
— Gloucester
Advertisement:

A tragedy by William Shakespeare, though the story is older than that, first found in the Historia Regum Britanniae (the tragic ending isn't, though).

Lear, the elderly king of Britain, decides to step down from the throne and potentially divide his kingdom into three parts among his daughters, Goneril, Regan and Cordelia. But before he officially seals the deal, he declares that the largest share will go to the daughter who loves him best. Much butt-kissing ensues — all except from the youngest, Cordelia. Despite being Lear's favorite and having the most love for her father, Cordelia doesn't resort to flattery, declaring that she has been a dutiful daughter towards Lear, and that her sisters' love for their father may be half-heartedly insincere because they have husbands; Cordelia further says that her husband will share half the burden and duties. The senile King Lear is so enraged by her declaration that he banishes her as well as his own close friend the Earl of Kent who speaks in her defense. Cordelia's share is divvied up between her elder sisters and Lear announces his retirement, though he insists on keeping one hundred knights, the respect and title of a king, and free room and board at his daughters' homes.

It doesn't take long before Lear wears out his welcome. His daughters, resentful and wary from the outset, quickly tire of the knights causing a ruckus, not to mention the lavish expense of keeping them on staff. Lear flips his lid once more and, rather than compromising with his daughters, he stubbornly denounces them. When Goneril and Regan double down by refusing to take in his knights, Lear, too, refuses their shelter, and is caught out in a thunderstorm while both his followers and his sanity desert him. He is left with only his Fool, the disguised Earl of Kent, Edgar, and Gloucester (after he's ousted from his estate by his bastard son Edmund) to care for him.

A closely related subplot follows another family, that of the Earl of Gloucester, another of Lear's close friends. His younger son, the illegitimate bastard Edmund, tricks Gloucester into thinking his legitimate son Edgar is plotting to kill him. Gloucester is duped, and Edgar goes on the run, disguising himself as Tom O'Bedlam, a homeless madman, to escape capture. Edgar falls in with his godfather Lear, while Edmund, resentful of the world who judges him simply because he was born a bastard, decides to show everyone what a bastard he can be and seduces not just one but both of Lear's elder daughters. With a few deft moves, he goes from inheriting nothing to being potentially the most powerful man in Britain.

And then the kingdom is attacked by Cordelia's new hubby, the King of France ... hilarity does NOT ensue.

King Lear is an extremely powerful play, and for quite some time was unpopular with critics and audiences because it made what was once a traditional Happily Ever After Fairy Tale ending massively depressing instead. Honest children are punished while villains prosper, the good characters suffer through madness and despair and are forced to extreme measures merely to survive, a king is forced to face his own sins, and one character is tortured brutally on-stage. The kingdom is left a shattered mess, and, if done right, so is the audience. The ending is so depressing that it was fully rewritten in 1681, so Cordelia survives and marries Edgar; the revision was more popular than the original for over than a hundred years. After World War II and the horrors people saw in it, the original story of Lear made a comeback. Today, it is considered one of Shakespeare's great tragedies, along with Hamlet, Macbeth, and Othello.

The play has been adapted several times for the screen, but no adaptation is more famous than the one that moves it to Japan, changes the daughters into sons, and adds a whole bunch of other stuff, Ran. See also Shakespeare Unwrapped, an Irish Edutainment show that dramatizes the play with a Younger and Hipper cast.

It's also been adapted into literature, such as Jane Smiley's 1991 novel A Thousand Acres, itself adapted into a movie. A reimagining of the story from the perspective of the Fool was written by Christopher Moore.

Lastly, a single line from this play had inspired Robert Browning to write a poem, "Childe Roland to the Dark Tower Came". That poem had in turn become the inspiration for The Dark Tower series by Stephen King.

The 1681 rewrite provides examples of: