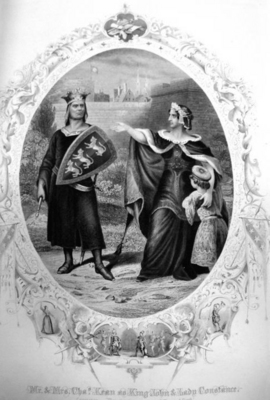 A play by William Shakespeare, thought to have been created somewhere between 1596 and 1598. It follows the life of King John of England, in his war against his rival, Phillip II of France, to his eventual death at the hands of a treacherous monk.
Advertisement:

Though today one of Shakespeare's more obscure plays, and generally considered one of his lesser works by those who do know of it, King John was one of his most popular plays in the nineteenth century. It has been staged on Broadway four times — but not once in the last century. A brief silent extract of John's death-scene, played by Herbert Beerbohm Tree in 1899, is often cited as the first Shakespeare play ever filmed.

It is one of Shakespeare's four plays to be written entirely in verse, all of which are of the "History" genre; the others are Richard II, Henry VI Part 1, and Henry VI Part 3.