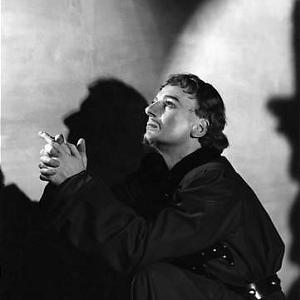 "You may my glories and my state depose,
But not my griefs; still am I king of those."
— King Richard II, IV.i
Advertisement:

An English history play by William Shakespeare. It's the first play in Shakespeare's second tetralogy, which includes Henry IV, Parts 1 & 2, and Henry V. It is believed to have been composed in 1595, and is sometimes referred to as a tragedy. It chronicles the later years of King Richard II of England, who reigned from 1377 to 1399, as he is overthrown by Henry Bolingbroke, later King Henry IV.

The play opens with Henry of Bolingbroke and Thomas Mowbray accusing one another of treason and murder, with the issue to be settled in single combat before Richard II and his court. Just as the two noblemen are about to fight, Richard abruptly calls a stop to their duel and instead banishes them both from England. John of Gaunt, Bolingbroke's father and the Duke of Lancaster, dies, and Richard decides to seize Bolingbroke's lands to fuel his war effort in Ireland. Bolingbroke returns—his excuse being that he was banished as Duke of Hereford but is now Duke of Lancaster—and is incensed that his lands and wealth have been taken by Richard. He organizes a campaign against Richard. At first, the campaign's goal is merely to get Bolingbroke's land back, but it quickly becomes an opportunity to seize the throne of England. In a scene that was originally censored out, Richard is forced to abdicate. He is put in prison, where he angsts about the loss of his throne, before being murdered by an ambitious nobleman. Henry IV regrets Richard's death, and vows to redeem himself by leading a crusade against Jerusalem.

One of the main characteristics of the play is its ornate, beautiful language, especially the flowery speeches of Richard II. He is contrasted with Bolingbroke, who is very plainspoken. The play is also one of just two by Shakespeare (King John being the other) to be written entirely in iambic pentameter, with no prose passages. Another notable feature is the Deposition Scene, which was cut from the original editions of the play because of its political touchiness — the resemblances between Richard and Elizabeth are great. Indeed, the Earl of Essex requested the play be performed the evening before his failed uprising against the queen.

A performance of the play can be seen here.

In 2012, the BBC produced Richard II as part of The Hollow Crown series with Ben Whishaw as Richard, Rory Kinnear as Bolingbroke and Patrick Stewart as Gaunt, and in 2013, a Royal Shakespeare Company production with David Tennant in the title role was broadcast to cinemas internationally (and is available to stream for free internationally