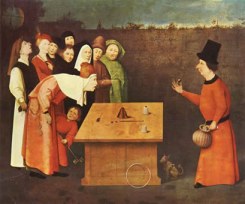 From printing to the steam engine (1439-1698), a time also generally known as the Early Modern Era. The arrival of movable type printing in Europe made books plentiful, and helped standardize the languages that used it. Much more survives from this period than from earlier.

Please note, that when we say steam engine we mean useful steam engine. Not Heron's first century toy, not the store, and definitely not the gaseous form of water (which predates mankind by hundreds of millions of years).

Notable works and authors from this time period include:

Tropes that originated in this time period: