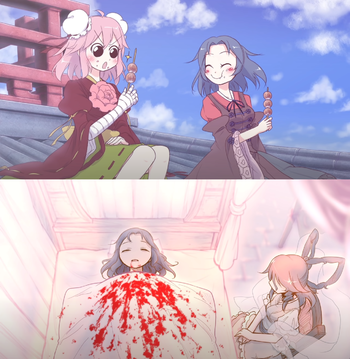 The problem with being so sweet is, sometimes, the world will eat you up.
Javier: This is for Mariana. She was a sweet little girl, just minding her own business!
Badger: Not anymore. Fuck her, and fuck you too.
— The Walking Dead: Season Three
Advertisement:

A series introduces a character as sweet and lovable, a fountain of Heartwarming Moments, more comic relief than anything, who likes nothing more than to pet little creatures. They make you adore them, root for them, love them and want to hug them. And yes, you may even be looking at The Heart of the lot.

Then they proceed to put them in to a battle against an antagonist and they wind up brutally killed off. Further, the awful deed is done on camera to make sure we know it. Usually they get a few moments to show their ability to keep a warrior on his toes, but their deaths are all but certain once they decided to pick up a weapon (or not) and go through trial by combat. As for the audience, what comes next is obvious.

Like Breaking the Cutie, such deaths provoke the lead character to an unprecedented level of bloodlust from watching the cutie die in such a gruesome manner and he is driven to kill the bastard who cut them down. At best, characters who witness this will enter an Unstoppable Rage. At worst, they may very well turn evil from the depravity of the act. A lesser grunt will either die in futility challenging the murderer or die a redeeming death for their beloved cutie. Expect an Anti-Villain or Noble Demon who witnesses the act to get pissed off at the offender, possibly with an Even Evil Has Standards rant. Moments like these are especially harsh for someone with a no kill code, so any villain who does this had better hope that the hero regains his composure before he becomes a bloody corpse on the ground.

As if it needs to be said, the above example is not the only circumstance this trope kicks in for. Essentially, any time the least deserving and absolute last character you wanted to see die horribly— by combat or otherwise— ends up dying horribly will likely be a Kill the Cutie moment.

Occasionally coupled off with Break the Cutie for extra gruesomeness. Too Good for This Sinful Earth is often used to justify this trope.

See also Death by Newbery Medal, Gut Punch, and Player Punch. Contrast Final Girl. Sub trope of Moral Event Horizon as characters who are guilty of this tend to cross it. Related to Nice Job Fixing It, Villain.

Judge Doom shows his ruthlessness on enforcing the law by dipping a poor innocent toon shoe.

Judge Doom shows his ruthlessness on enforcing the law by dipping a poor innocent toon shoe.