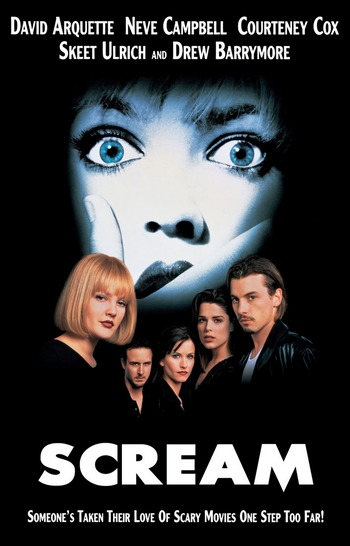 In 1996, director Wes Craven (of A Nightmare on Elm Street fame) and writer Kevin Williamson (who would go on to make Dawson's Creek and The Vampire Diaries) decided to make the ultimate slasher movie, Scream.

The Scream films had an ingenious means of setting themselves apart from other slashers of the time; instead of playing themselves as straight-up horror films, they serve as dark, postmodern "meta" parodies of the slasher genre. The killers all deliberately invoked slasher movie clichés while their targets tried to survive by attempting to guess which horror movie tropes the killers would invoke next — a move that just as often got them killed as it did save them. The series was awash in Conversational Troping, as twenty years' worth of horror movie tropes got name-dropped, mocked, and then invoked anyway. To a generation that had grown up viewing slasher films as trite and cliched following the genre's burnout at the end of The '80s, Scream served as a breath of fresh air.

However, many (though certainly not all) of the horror films that copied its formula in the ensuing years didn't understand this. A good number of filmmakers instead felt that the Scream franchise's success came as a result of its casting (which featured stars from hit TV series like Party of Five, Friends and Buffy the Vampire Slayer) and its "hip" dialogue. As a result, the original film has suffered from Hype Backlash since its release, since its own various tricks and tropes became more commonplace in the horror genre.

Scream wholeheartedly lampshaded and deconstructed a large number of tropes — one of the first major, mainstream films to do so since Airplane! — while also remaining grounded in reality and exploring a whole new genre. The original film predates Buffy the Vampire Slayer by only a few months when it comes to having a story about sarcastic, Genre Savvy teenagers in a postmodern horror setting.

A notable trait of Scream is that it is not a Villain-Based Franchise; the villain, Ghostface, is an anonymous identity that is taken by various people throughout the series, although they use the same brand of voice changer, providing the illusion of a single person (voice-acted by Roger L. Jackson). By contrast, it has a consistent trinity of heroes who appear in all films released so far: Sidney Prescott (Neve Campbell), Gale Weathers (Courteney Cox), and Dwight "Dewey" Riley (David Arquette).

When the fourth film failed to launch a new trilogy, Scream went the way of many movie franchises and spawned a pair of television series in the latter half of the 2010s.

In addition to the films and television series, Ghostface has also appeared in:

The Scream franchise provides examples of the following tropes:

Randy, a horror movie fan who lists three rules for surviving a horror movie â don't have sex, don't drink or use drugs, and never say "I'll be right back." Naturally, the characters break all three in record time. Randy expands his rules to sequels and trilogies in the later films.

Randy, a horror movie fan who lists three rules for surviving a horror movie â don't have sex, don't drink or use drugs, and never say "I'll be right back." Naturally, the characters break all three in record time. Randy expands his rules to sequels and trilogies in the later films.