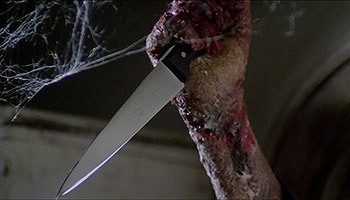 A particular shot commonly used in action flicks, gangster movies, horror movies, and murder mysteries. All that is shown is An Insert of a hand or a pair of hands, and possibly the murder weapon itself. This gives a sense of building tension without revealing the murderer's identity. Sinister black gloves are optional.

Often, the character is walking slowly — one might say... ominously — with a gun in his hand, held down by his side. He may well be wearing a trenchcoat.

Common in slasher films. Even more common in Giallo.

Not to be confused with the Touch of Death or Finger Poke of Doom.