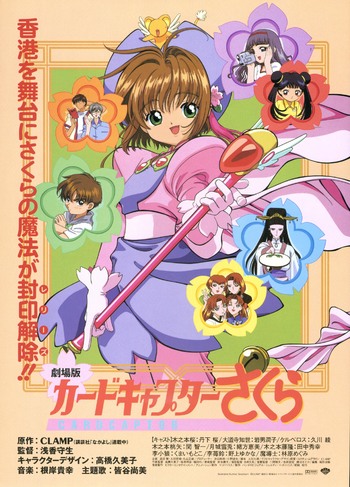 Cardcaptor Sakura: The Movie is a 1999 anime film set between seasons 1 and 2 of the Cardcaptor Sakura anime series adaptation from the manga by CLAMP. The first film was directed by Morio Asaka and written by Nanase Ohkawa with most of the crew from the anime series. While Madhouse did the animation the visual effects were provided by Studio Ghibli.
Advertisement:
While on Spring vacation, Sakura Kinomoto unexpectedly wins a trip for four to Hong Kong in a competition which includes her best friend, Tomoyo Daidouji and accompanied by her older brother, Toya and his best friend, Yukito. Once there, however, Sakura senses a supernatural presence and is troubled by dreams about a mysterious woman.The film was a success for the franchise, winning the Kobe Award for Best Theatrical Animated Film in 1999. As was set between seasons 1 and 2 of the anime series Nelvana picked it up to be dubbed along with the rest of the series, with changes to dialogue and character names to fit the Cardcaptors version, retitling it Cardcaptors: The Movie, though all the scenes remained intact except for the opening titles. The second movie, Cardcaptor Sakura Movie 2: The Sealed Card was not dubbed by Nelvana, but rather by Bang Zoom who gave it an accurate translation with names, character relationships and references to its Japanese origins intact.