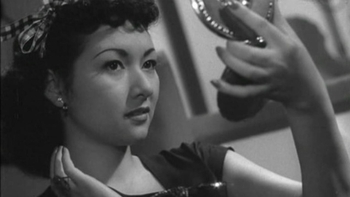 Carmen's Pure Love, aka Carmen's Innocent Love or Carmen Falls in Love, is a 1952 film directed by Keisuke Kinoshita.

It's a sequel to Kinoshita's 1951 film Carmen Comes Home. Hideko Takamine returns as Kin aka "Lily Carmen", a cheerful stripper who got her name through her specialty routine, a burlesque version of Bizet's Carmen. She has come down in the world a little bit from the previous film. Her best friend and fellow stripper Akemi got knocked up between movies, was abandoned by her faithless boyfriend, and is now struggling to care for an infant daughter. Carmen is left supporting all three of them with her work as a stripper, which is why they're living in a fleabag apartment and struggling to eat.

In fact, things are so desperate that Carmen pressures Akemi to abandon the baby. They do so, abandoning the girl on the doorstep of a rich family, but they immediately come back, retrieving Akemi's daughter and in the process meeting the rather messed up Sudo family.

Hajime Sudo is an artist, and a womanizer, who is getting pressured by his parents to marry a rich girl despite the fact that Hajime has a girlfriend who bore him a love child. Hajime's fiancée Chidori is seemingly sleeping with every man in Tokyo, much to the fury of her mother Kumako, a right-wing politician, who is running for parliament in Japan's first free elections.

Carmen foolishly falls in love with Hajime, despite the fact that he obviously has no serious interest in her. Will she suffer heartbreak again?