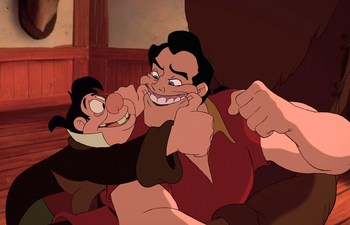 A Stock Pose about a physically-forced smile. This takes on 2 forms:

Depending on the outcome, this can lead to either When She Smiles or The Unsmile.

Compare and contrast Happiness Is Mandatory when smiles are forced in an industrialized way with much darker intentions. Rubber Face is when a character stretches out another's face comically, not necessarily into a smile. Subtrope of Technically a Smile.