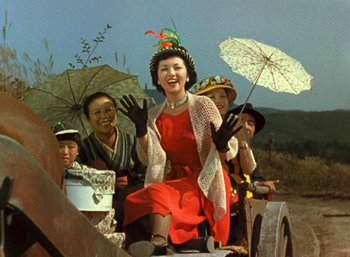 Carmen Comes Home is a 1951 film directed by Keisuke Kinoshita.

In this lighthearted comedy, a woman named Kin who has adapted the stage name of "Lily Carmen" returns from Tokyo to her rural village in the shadow of Mount Asama. It seems that Kin/Carmen ran away from home several years ago and found success in the big city...as a stripper. She's still been a dutiful daughter, sending money home. Her father Shoichi is mortified by how his daughter makes her living, but still takes the money.

Other characters include Carmen's far more traditional sister Yuki, Carmen's fellow stripper Akemi who has accompanied her home, Maruju the jerkass businessman, a former schoolteacher named Haruto who was blinded in the war, and his stressed-out wife Kiyoshi.

This was the first ever film in Japan made in color, although black and white films would still prove very popular in Japan well into the next decade.