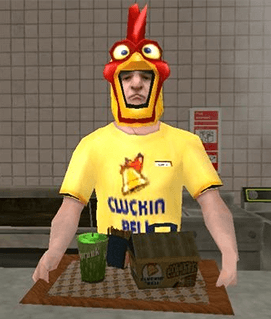 "Hope you choke-a-doodle-doo."
"I had two people say that to me today, 'I'm going to have you fired.' Go ahead, be my guest. I'm wearing a green velvet costume; it doesn't get any worse than this."
— David Sedaris, "SantaLand Diaries"
Advertisement:

Sometimes, working as a Burger Fool just isn't embarrassing enough. Sometimes, the humiliation ante must be upped— that's where this trope comes in. Where most part-time jobs are content with just making their employees wear a polo shirt and a nametag, this one adds some sort of embarrassing accessory: A stupid hat, a stupid shirt, or a really bad colour scheme. Some places take it further, making their employees wear a whole Goofy Suit full of embarrassment. But whatever the case, the outfit makes the workers stand out, and makes the character wish they were dead.

Often in the form of embarrassing Signature Headgear at a restaurant, mainly a costume elsewhere. If the job is as a Mascot at an Amusement Park or Suck E. Cheese's, this will be a Goofy Suit. Can overlap with No OSHA Compliance if the job involves cooking and the costume limits visibility, ability to grasp objects or has a tail. If this isn't a dead trope in real life, its certainly dying as the mockery of this trope has led to such establishments not being taken seriously (the polo and khakis look a lot more professional.)

Compare Fan Service With A Smile, where the job demands wearing something revealing for sexual appeal. Compare also Pantomime Animal, which can be comparably tiresome, especially for the actor playing the back legs. And Dreaded Kids' Party Entertainer Job, when performing at kids' parties is portrayed as a humiliating job. Supertrope of Loser Team Mascot.

Interestingly, one way to determine if your work clothes are tax-deductible is "if you'd be embarrassed to go to the bar in them

Whoever started up this place must really like giant lemons.

Whoever started up this place must really like giant lemons.