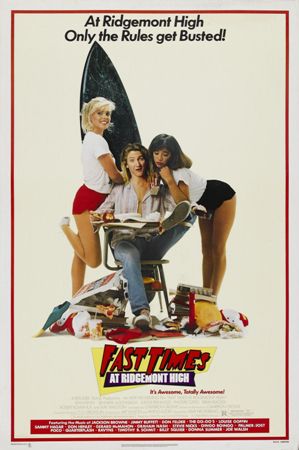 "First of all Rat, you never let on how much you like a girl. 'Oh, Debbie. Hi.'
Two, you always call the shots. 'Kiss me. You won't regret it.'
Now three, act like wherever you are, that's the place to be. 'Isn't this great?'
Four, when ordering food, you find out what she wants, then order for the both of you. It's a classy move. 'Now, the lady will have the linguini and white clam sauce, and a Coke with no ice.'
Advertisement:
And five, now this is the most important, Rat. When it comes down to making out, whenever possible, put on side one of Led Zeppelin IV."
— Mike Damone, on his "five-point" plan

Fast Times At Ridgemont High is a 1982 Coming of Age / Slice of Life film written by Cameron Crowe, based on his novel, and directed by Amy Heckerling. It follows the lives of a handful of high school students over the course of a school year, focusing mostly on Stacy Hamilton (Jennifer Jason Leigh) and her eventual boyfriend, Mark "Rat" Ratner (Brian Backer). The other main characters are Stacy's brother, Brad (Judge Reinhold); her best friend, Linda Barrett (Phoebe Cates); Rat's best friend, Mike Damone (Robert Romanus); Jeff Spicoli, a perpetual stoner in Stacy's history class (Sean Penn); and Mr. Arnold Hand, the history teacher who is frequently put upon by Spicoli's antics (Ray Walston).

When the film was first released, it received mostly negative reviews from critics who wrote it off as just another teen Sex Comedy. These days, it's often considered one of the best high school films ever made. It was also known as the first significant North American teen movie of The 1980's.