Let's Wait a While 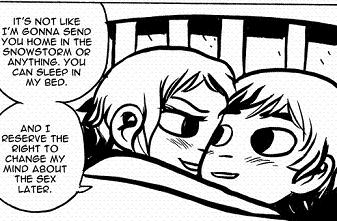 Did she just make not putting out sound sexy?
"Life's too short to make a mistake
Let's think of each other and hesitate
Young and impatient we may be
There's no need to act foolishly
If we part our hearts won't forget it
Years from now we'll surely regret it"
— Chairmen of the Board, "Give Me Just a Little More Time"
Advertisement:

A Sister Trope to Celibate Hero, where a character declares that they've no intention of having sex just for the sake of sex. Either they're waiting for "The One", or they think they've found them, but the timing isn't right (and if it's Their First Time, they want it to be special).

A common thing in many religions, which declare that sex is sacred and must be saved for the wedding night. In fact, pre-marital sex used to be a taboo topic, but nowadays it seems to be a more common standard.

If the character who wants to wait is male, it's usually to show him as a romantic or old-fashioned (often both). If female, there's about the same chance it'll be because All Women Are Prudes.

A frequent variant is an engaged couple deciding not to have sex again until after the wedding to make their wedding night more "special".

Compare Good People Have Good Sex, But I Would Really Enjoy It. Contrast Nature Abhors a Virgin, Everybody Has Lots of Sex.

Occasionally paired with Insatiable Newlyweds to show that the couple weren't waiting out of prudishness.