Film / The Food of the Gods 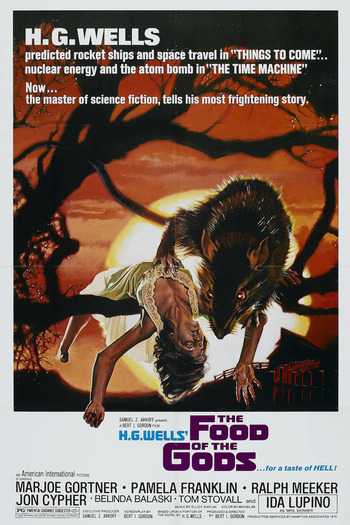 The Food of the Gods is a 1976 horror film directed by Bert I. Gordon, so it naturally involves people fighting against (badly done) giant things. The cast includes Marjoe Gortner, Pamela Franklin, Ralph Meeker, Jon Cypher, and Ida Lupino.

Loosely based on a H. G. Wells novel The Food of the Gods and How It Came to Earth,note as was his earlier film Village of the Giants the film follows pro football player Morgan (Gortner), who — on a vacation trip with his friends to a remote island off British Columbia — encounters giant wasps that kill one of the friends. He later discovers that the insects got huge due to a weird substance which is bubbling from the ground, and that any offspring of creatures that eat it will grow into giants. Unfortunately, rats have eaten the stuff and their litters are also growing into unusual sizes....

Munch on these examples: