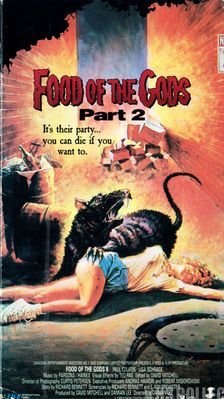 Ostensibly, it's the sequel to Bert I. Gordon's 1976 (partial) movie adaptation of H.G. Wells' novel The Food of the Gods, although the movie's shooting title was simply Gnaw and the connection to Gordon's film was added later. Certainly, it has nothing to do with the events of the 70's film beyond the title. In that film, the titular "food" was a mysterious oatmeal-like glop that burbled up from the ground. Here, the "food" (and it's only called that once) is a greenish growth serum developed by a scientist.