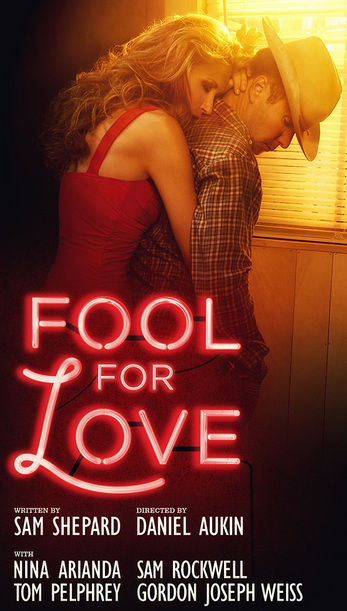 Fool for Love is a 1983 play by Sam Shepard.
Advertisement:

May is holed-up in a desert motel, trying to hide from Eddie, an alcoholic, hotheaded cowboy with whom she's had a long relationship. Eddie finds her, though, and they go through their usual fighting. After accusing him of having a relationship with a woman she calls The Countess, May announces she's going out on a date with a man named Martin. When Martin arrives to pick her up, this leads to a series of confessions revealing that the relationship between May and Eddie is much different than it seemed to be at first, and the mysterious Old Man who's been popping in and out of the story is a central figure in their lives.

The play was adapted into a film in 1985, directed by Robert Altman, with a screenplay by Shepard, who also starred as Eddie, along with Kim Basinger (May), Harry Dean Stanton (The Old Man) and Randy Quaid (Martin).