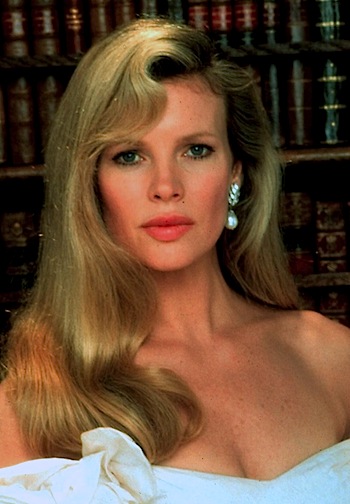 "With every project I've ever done, I've always treated it like I'm still in school. Each time you try to go a little further, get a little deeper, feel a little more, sculpt it a little better."
Advertisement:

She is known for her portrayals of Domino Petachi, the Bond girl in Never Say Never Again, and Vicki Vale, in Batman (1989). Basinger received a Golden Globe Award for Best Supporting Actress – Motion Picture nomination for her work in The Natural. She won an Academy Award, Golden Globe, and Screen Actors Guild Award for Best Supporting Actress for her performance in L.A. Confidential (1997). Basinger also acted in the movies 9½ Weeks (1986), I Dreamed of Africa (2000) and 8 Mile (2002), and was in the music video for Tom Petty's "Mary Jane's Last Dance".