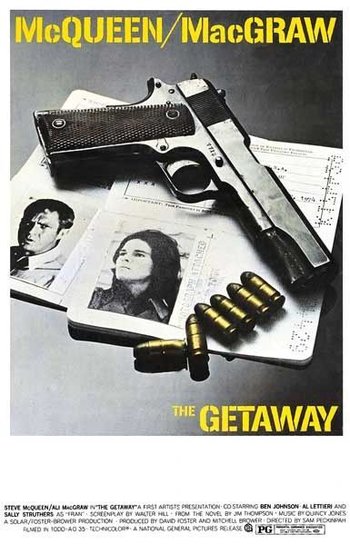 The Getaway is a 1972 crime drama film directed by Sam Peckinpah, starring Steve McQueen and Ali MacGraw. It was based on the novel of the same name by Jim Thompson. Walter Hill wrote the screenplay.

Gordon "Doc" McCoy is denied parole after serving four years of a ten-year sentence for armed robbery. Having had enough of jail, he gets his wife Carol to approach Benyon, a crooked politician. Carol secures Doc's release in a way that Doc later does not approve of at all. Newly freed Doc is given a job by Benyon: rob a certain small-town bank. Doc, Carol, a thug of Benyon's named Rudy, and a Red Shirt thug pull off the bank robbery, but not without spilling some blood. As is usual with bank robberies in the movies, the criminals start turning on each other, and Doc and Carol wind up having to flee from Benyon's goons and the law both.

A remake, directed by Roger Donaldson and starring Alec Baldwin and Kim Basinger, was released in 1994.

Not to be confused with the third-person video game series, or the pinball table The Getaway: High Speed II, as well as the 2013 film of the same name.

Tropes seen in both films: