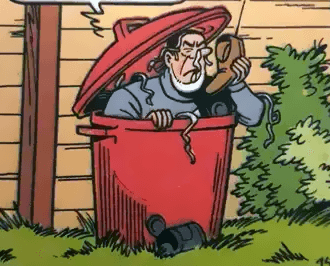 Jerom learns the risks of this trope.
Advertisement:

A trash can may be smelly and full of trash, but it's usually a good hideout in a pinch. Some characters on the lam take note of this, going inside a trash can or dumpster and hiding out. After all, it's probably less worse than whatever the person you're hiding from is planning to do to you.

Garbage cans also make perfect hideouts for more mundane reasons, like wanting to spy on someone. However, this hiding spot comes with the risk of trash being dumped on the person hiding inside, or worse, getting tossed in the dump.

If the character isn't hiding but was put in garbage out of spite, see Stuffed Into A Trash Can.