Film / Getting Even with Dad 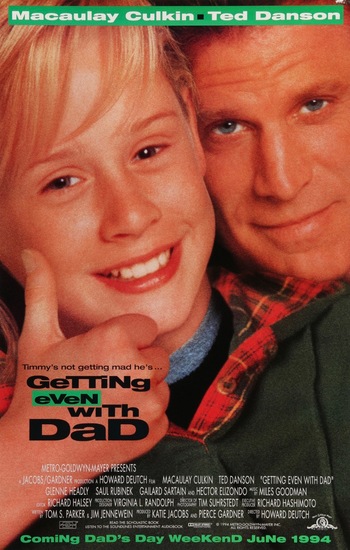 Ray Gleason (Danson) is an ex-convict trying to turn over a new leaf by opening a bakery. Lacking funds for his new venture, he plans to steal some valuable rare coins with his two bumbling criminal buddies Bobby (Saul Rubinek) and Carl (Gailard Sartain). They successfully pull off the heist, but Ray's estranged 11-year-old son Timmy (Culkin) then shows up unexpectedly. Being a lot cleverer than Ray and his cronies, Timmy soon finds out about the robbery, hides the stolen coins, and will only return them on condition that Ray spends time with him doing fun things.

So Timmy and Ray spend a week visiting an array of zoos, theme parks, aquariums and sporting events. Carl and Bobby tag along as well, just in case Timmy tells Ray where the loot is. Inevitably, father and son grow to like each other. Meanwhile, Timmy discovers that the police are closing in on his dad and Ray falls for Theresa (Glenne Headly), unaware that she is the undercover cop trailing him. Sensing that Ray will be caught, Timmy urges his dad to choose between him and the coins.