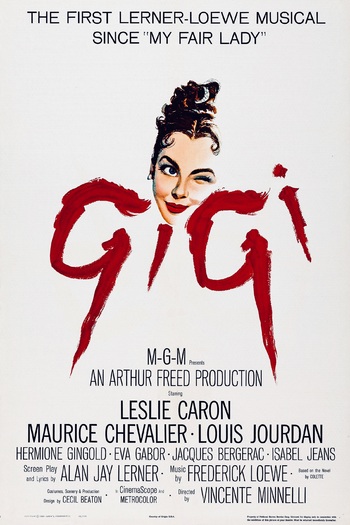 A 1958 MGM musical film based on the 1944 novella by French author Sidonie-Gabrielle Colette, Gigi was directed by Vincente Minnelli and written by Lerner and Loewe, following their success with My Fair Lady. Starring Leslie Caron as the eponymous Gigi, Louis Jourdan as Gaston, and Maurice Chevalier as the narrator Honoré, the film won all of its nine Academy Award nominations, including Best Picture, breaking the record set by Gone with the Wind.note Not counting the latter's two special awards.

In Paris during The Gay '90s, Gaston Lachaille is a rich young playboy who wants to break free from the stultifying traditions of his family. He finds refuge in his time with Madame Alvarez (Hermione Gingold) and her tomboyish granddaughter Gilberte, or "Gigi" for short; a sincere and happy teen being raised by her refined great-aunt and grandmother to be a wealthy man's courtesan. For quite a while, the two see each other as nothing more than good friends. Over time, however, Gaston comes to the realization that Gigi has grown up. Can he really bear to take her as his mistress in a transactional relationship?

Betty Wand filled in for most of Leslie Caron's singing.

Not to be confused with Gigli.