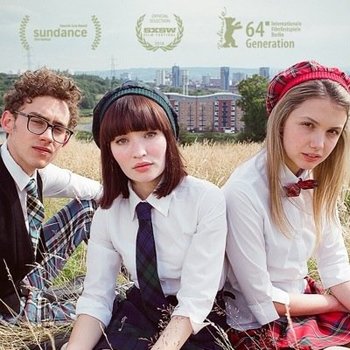 There's nothing quite like starting a band, right? Going out on an adventure of creativity, excitement, and camaraderie? It's an appealing dream to be sure, especially if you're stuck in a psychiatric hospital far from home getting treated for anorexia nervosa.

This is the situation Eve (Emily Browning of A Series of Unfortunate Events fame) finds herself. On her periodic escapes from the institution she makes attempts to get into the music world, on one occasion forming a band with James (Olly Alexander) and Cassie (Hannah Murray, better known as, err, Cassie on Skins or Gilly on Game of Thrones), and on another submitting a demo tape to a local rocker Anton (Pierre Boulanger) in hopes he'll send it to the local radio DJs. So far, so good, except Eve's still dealing with her personal issues and potentially creating new ones by getting involved with Anton.

God Help the Girl is a Kickstarter-funded 2014 film directed by Stuart Murdoch, the lead singer of Belle and Sebastian, based on a sorta kinda Concept Album of the same name, which isn't technically a Belle and Sebastian record, but has many of the same players. The film has all the trademarks one would expect from Murdoch: a wistful air, homages to the styles and films of the early to mid '60s, mixed tragic and comic elements and a lush musical soundtrack.