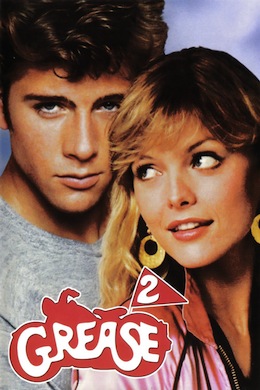 The new kid Michael is a nerd. A hopeless nerd! And furthermore, he's in love with Stephanie, who as a Pink Lady can only go with a T-Bird. Naturally, the solution is to find out what she wants in a man and become it, regardless of cost or effort. But Michael succeeds so wildly he ends up upstaging the T-Birds, impressing the whole school, and becoming so awesome that Stephanie starts to question whether she wouldn't rather just have the normal, nerdy guy who keeps helping her with her essays. When Michael finally reveals his true identity, he gets the girl and the acceptance he so craves. Hooray!

Even those who took the original seriously might have trouble with this one. Song topics include plant reproduction (which is really sex), going off to war to become a man (which is really sex), and the moral flexibility of the women one meets at the grocery store (which isn't even disguised). Also features a talent-show act with girls trying to act sexy while dressed as Christmas trees and jack-o'lanterns, and almost every instance of informed or designated anything.

This was Michelle Pfeiffer's break-out role, but the only other actors you will recognize are Christopher McDonald, Rex Manning as the male lead, Pamela Adlon, Adrian Zmed, and the actors who reprised their roles from the first movie.