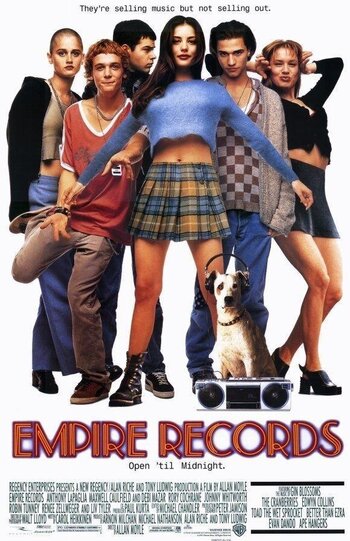 From left to right: Debra, Mark, Lucas, Corey, AJ, and Gina. Not pictured: Joe.
Debra: I guess nobody really has it all together.
Corey: No.
Debra: I feel like I should welcome you to the neighborhood or something.
Advertisement:

It depicts a day in the life of a Cloudcuckoolander, a Harvard-bound overachiever, a fun-loving Vamp, two stoners, a laid-back artist, and a troubled young woman. They all work at a Delaware record store under the aegis of a Benevolent Boss and a not-so-benevolent owner. An aging singer is visiting for the day. They must save the store, make discoveries about themselves, and rock out to the very best of mid-nineties alternative music.