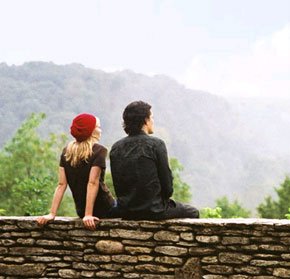 Look for the girl in the red hat.
"There's a difference between a failure and a fiasco. A failure is merely the absence of success. Any fool can achieve failure. But a fiasco, a fiasco is a disaster of epic proportions. A fiasco is a folk tale told to others to make other people feel more alive because it didn't happen to them."
Drew: "I think I've been asleep most of my life."
Claire: "Me too."
Advertisement:

Drew Baylor (Bloom) is on top of the world. He just designed a shoe for a Nike Expy. It's expected to be a huge hit. His family is proud of him. He has a beautiful girlfriend (Jessica Biel). Obviously, it doesn't last. In fact, the audience doesn't even get to see any of his success, because the film opens with Drew's firing. His shoe bombed. It's being recalled, and the company is losing millions of dollars. So many millions that you could round it off to a Billion. His girlfriend dumps him. His career is flushed down the toilet. What's left? Suicide, of course!

But before he can off himself (though not before he's given away all his possessions on the street corner), he gets a call from his sister (Judy Greer), informing him that their father has died while visiting his relatives in Elizabethtown, Kentucky. Both Drew's mom (Susan Sarandon) and his sister are far too emotional to deal with the situation. They call on him to arrange the funeral and cremation. So Drew's plans for suicide are put on hold as he flies off to Kentucky to meet with his family.

On the plane, Drew meets a quirky flight attendant named Claire (Dunst). Though he doesn't tell her his problems, she senses something is amiss and strikes up a conversation with him. They talk briefly on the plane, and she leaves him with her phone number. Drew thinks nothing of it until he actually gets to Elizabethtown, and has to deal with his family and his father's remains. In emotional turmoil, he reaches out to Claire and the two strike up a connection.

The movie is supposedly based on director Cameron Crowe's own life. It also, rather oddly, features Food Network TV chef Paula Deen as Drew's aunt.