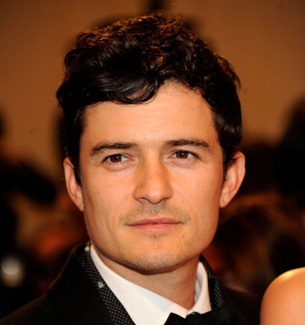 "I want to do work that has a message and casts a light over an area that's dark. But I'm fun and jovial, too."
Advertisement:

He rose to prominence with the role of Legolas in Peter Jackson's The Lord of the Rings trilogy and later with Disney's Pirates of the Caribbean series; between that and Kingdom of Heaven and Three Musketeers, he can fairly be called "King of Costume Dramas". While Bloom is most closely associated with his status as a heartthrob and as "the guy with the sword" in summer blockbusters, he has a diverse resume of roles in both mainstream and independent productions.

Outside the movies, one of the roles associated with Bloom is that of a survivor. At the age of 19, he fell three stories from the roof of an apartment building in London, resulting in a broken back. Despite doctors' fears that he would never walk again, he made a full recovery.

He is also known for his charity work and environmental activism with such organizations as UNICEF and Global Green. In 2007, he traveled to Antarctica with his cousin, photographer and Global Green co-founder Sebastian Copeland, to see first hand the effects of climate change. He wrote the foreword to Copeland's 2008 book Antarctica: A Call to Action.

Bloom was married to model Miranda Kerr from 2010 to 2013. They have a son named Flynn Christopher. He's currently engaged to singer Katy Perry. They have a daughter named Daisy Dove.