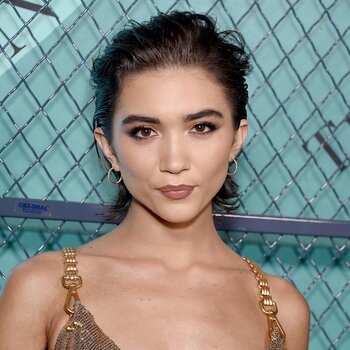 Rowan Blanchard (born October 14, 2001 in Los Angeles, California) is an American actress and activist. She is best known for her role as Rebecca Wilson in Spy Kids: All the Time in the World and portrays Riley Matthews in Girl Meets World. She also portrayed Cleo in the Disney Channel original movie Invisible Sister alongside Mighty Med's Paris Berelc and Karan Brar of Bunk'd. She was also known as Jackie Geary in The Goldbergs during seasons 3—5 before being replaced by Alexis G. Zall for season 6, as well as Alexandra Cavill in Snowpiercer.

She's also well-known for for her political activism in areas such as intersectional feminism, human rights, and gun violence, especially on social media. She was invited to speak at the UN Women and US National Committee's annual conference as part of #TeamHeForShe, a feminist campaign.

In January 2016, Rowan disclosed in a series of tweets that she was "open to liking any gender" and identified as "queer". She is of Armenian, English, Danish, Lebanese, Moroccan, Syrian and Swedish ancestry.