Film / Spy Kids: All the Time in the World 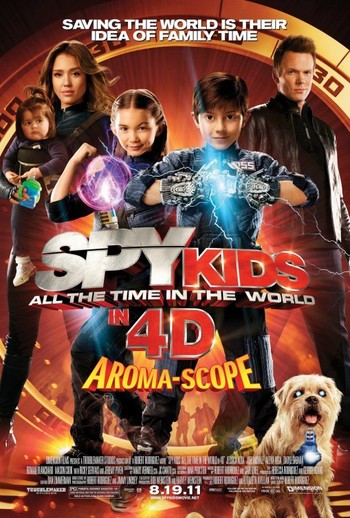 Spy Kids: All the Time in the World is the fourth film in the Spy Kids franchise. The film was marketed as "4D", with the fourth dimension being smell. Theatergoers were given an "Aroma-scope", or a scratch-and-sniff card with instructions to use at various points in the movie.

The film starts with a pregnant Marissa Cortez Wilson (Jessica Alba) chasing down and capturing Tick Tock (Jeremy Piven). She is married to Wilbur Wilson (Joel McHale), though she doesn't reveal she's a spy. Marissa has two step-children, Cecil (Mason Cook) and Rebecca (Rowan Blanchard), and a dog named Argonaut.

A year later, Wilbur's children don't really like their stepmother. In an effort to make amends with them, Marissa gives them her necklace, which has the Chronos Sapphire. Marissa learns that Tick Tock has escaped and working for the villainous Time Keeper, who is making time speed up with his Armageddon device. Tick Tock sends his minions to retrieve the Chronos Sapphire, which is the only known element to stop his device. Cecil and Rebecca escape, aided by Argonaut — who is revealed to by a robot (voiced by Ricky Gervais) — and go to the OSS headquarters, where the kids meet Marissa's niece Carmen Cortez, who introduces them to the old Spy Kids Division. The kids find themselves in a race against time to stop Tick Tock and the Time Keeper.

Spy Kids: All the Time in the World contains examples of: