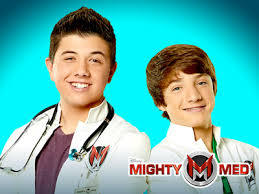 We work at a secret superhero hospital, no big deal!
Advertisement:

Mighty Med (2013-2015) is a Disney XD comedy show about two kids, Kaz (Bradley Steven Perry) and Oliver (Jake Short), that discover a secret hospital where the superheroes they've read about in comics for years are treated, and they get jobs there as their years of comic experience makes them Genre Savvy about the ailments the heroes face.

In addition to the typical Disney XD Red Skies Crossover and Cross Through links, it had a direct Crossover with Lab Rats in summer 2015.

After only two years, the series ended with the Season 2 finale airing September 2015. During the same month, it was also announced that both this series and Lab Rats will be replaced by a permanent crossover series of the two titled Lab Rats: Elite Force staring characters from both series (including Perry, Short, and Berelc).