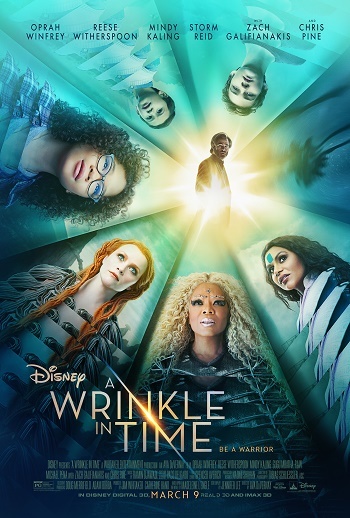 "The only thing faster than light is the darkness."
Dr. Kate Murry: Imagine that the ant here wants to get to her other hand.
Meg Murry: The quickest option is to walk across the string.
Kate: But it turns out a straight line is not the shortest distance between two points. Not if you use a fifth dimension.
Meg: It’s outside of the rules we know of time and space. So the ant arrives in my hand instantaneously.
Calvin: So you fold space.
Meg: More likely wrinkle it.
Advertisement:

After learning her astrophysicist father is being held captive on a distant planet deep in the grip of a universe-spanning evil, Meg Murry works with her highly intelligent younger brother, her classmate, and three astral travelers to save him.

A Wrinkle in Time contains examples of:

♫ Sweet dreams are made of this
Who am I to disagree
Travel the world and the seven seas
Everybody looking for something... ♫