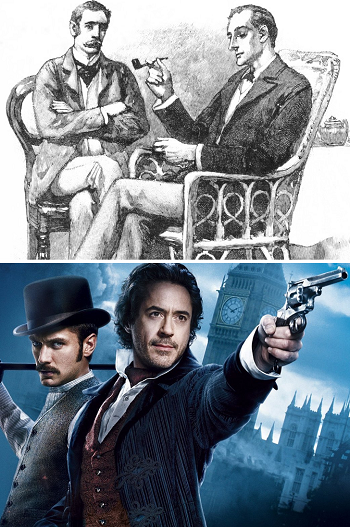 Gentlemen sleuths Holmes and Watson are practically Action Heroes in this film.
“You’ve read the dark, satirical comic. Now, get ready for the movie adaptation that transforms the complex characterizations and realistic action into a gory version of The Matrix.”
— Honest Trailers for Watchmen
Advertisement:

There are works that, by design, have little or no action due to having a focus on drama, suspense, comedy, etc. When the work is sourced for an adaptation, they end up expanding on it by adding action scenes. This can result in turning a bookish character into a Badass Bookworm, a Stealth-Based Mission becomes a big shootout or a low stakes Road Trip Plot turning into a Race Against the Clock. If the original story's protagonist was female and not much of an Action Girl, expect Xenafication.

While sometimes this has the effect of Viewers Are Morons or Viewers Are Goldfish, especially when doing so with a very benign property, this can also be part of a Pragmatic Adaptation by showing the quest isn't easy, expand on what may otherwise be a short story or appealing to the audience with more impressive visual effects sequences. This trope is more common among works for children, though not always.

Compare Actionized Sequel, where a franchise becomes further action-oriented as it continues.