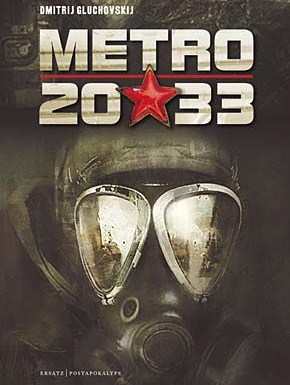 "Dear Muscovites and guests to our capital!
The Moscow metro is a form of transportation which involves a heightened level of danger."
— A notice in the metro
Advertisement:

Metro 2033 is a novel written by Dmitry A. Glukhovsky. It first appeared as a Web Serial Novel in 2002, with the first print edition released in 2005. It went on to become a best seller in Russia, and helped establish a successful franchise. The story follows the 20-year-old Artyom, as a promise to a mysterious stranger forces him to leave the relative safety of his home station, ("ВДНХ"), and find his way through the dangerous Metro.

The book is set in the Moscow Metro system twenty years after a devastating nuclear war. Various factions - including The Fourth Reich, The Red Line, and The Gemeinschaft der Ringstationen - inhabit the stations. That is, the stations that have not yet succumbed to diseases, tent fires, cave-ins or mysterious mass deaths. The tunnels between the stations are populated by rats, mutants and unexplainable but very lethal phenomena. Oh, and don't even think about going up to the surface.

In 2010, the Ukrainian game developer 4A Games created a loose Video Game adaptation of the novel. The game has also received a sequel, which is not an adaptation of either sequel novel.