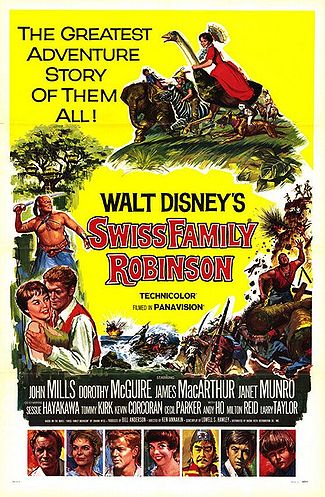 The best-known screen adaptation of Johann Wyss' The Swiss Family Robinson, produced by Disney in 1960. A much more compact and story-driven production than the original novel, it was a well-reviewed family-friendly hit. It follows the spirit of Wyss' basic Crusoe-but-a-whole-family premise while adding a human threat from the beginning to provide the climactic ultimate test of the family's resourcefulness.

At the opening of the story, the titular family (a couple and three boys) are trying desperately to save the cargo ship they are on during a huge storm. The captain of the ship had deliberately sailed into the storm to escape from a pirate ship, but it became severe enough that everyone abandoned ship and left the Robinsons with no lifeboats for themselves. Eventually, the ship runs aground near an island, and the storm ends. The pirates, who have followed the ship, approach, but Mr. Robinson flies the flag indicating that the Black Death is aboard and the pirates retreat. The family then build some rafts and ferry themselves and as many supplies as they can out to the island.

Everyone in the family proves to be extremely resourceful and together construct a comfortable and secure set of treehouses. Once they feel safe, Mr. Robinson builds a small sailing boat and the two older sons Fritz and Ernst sail around the shore of the island exploring. They come upon the pirates once again, and find that they have captured an old man and his son from another ship. Sneaking up to save them, Fritz and Ernst only manage to get away with the boy, Bertie, who ends up actually being Roberta. The three return to the Robinson base, and begin to prepare defenses against impending retribution from the pirates.

The film was a big hit upon release, and continues to be one of the highest-grossing films of all time when adjusted for inflation.

Example of:
You Don't Want to Catch This