Video Game / The Wizard of Oz: Beyond the Yellow Brick Road 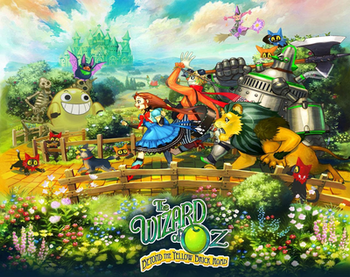 Oh, we're off to fight the Witches, the Wicked Witches of Oz...
Advertisement:

A Nintendo DS Eastern RPG based around The Wonderful Wizard of Oz. The Wizard of Oz: Beyond the Yellow Brick Road - known as RIZ-ZOAWD in Japan - was developed by Media Vision and published by D3 Publisher in 2008, with a North American version published by X Seed Games about a year later. It features a unique, entirely touch control scheme, controlling the character and options via a virtual track ball and buttons.

It begins with a Cute Witch reading from a book and deciding to bring a lead character and her pet into it. These two individuals just so happen to be Dorothy, who lives contently by herself in the country with her dog Toto. They are swept up by a mysterious tornado, and thrown into the World of Magic, Oz, where progression is impossible for those who lack magic and fighting skills. A mysterious projected shadow and voice calling itself the Wizard of Oz introduces himself to Dorothy, and invites her to see him at his castle. He gives her magical shoes so she can move about in the world and she obliges to seek him out.

Along the way, she encounters a good natured and optimistic - but dumb - Scarecrow who wants a brain; a Bruiser with a Soft Center Lion who wants courage; and an Axe-wielding, powerful, short-tempered Tin Logger who can only say "Hva!"

The friends eventually get to Oz's castle, and he requests a favor. Four witches who he fears are rising in power: Flora, the Spring witch; Delphi, the Summer witch; Holly, the Autumn witch; and Protea, the Winter witch and mother of the other three. They've already taken over areas surrounding his palace, dividing the land and preventing its unity. Since there are barriers in place he cannot cross to end this, and he cannot go to deal with each witch individually, as one of the others may take over his palace while he is away. He requests that Dorothy and her friends take a magical 'Egg' that provides their power and defeat the witches in each area. In exchange, he will grant them their most desired wishes in gratitude.

So the four embark to defeat the witches, not knowing what will happen next...

Beyond The Yellow Brick Road has examples of: